The Etxeondo story: from the Amasa-Villabona farmhouse to the Paris Podium. Part one.

Paco Rodrigo and María Jesús Uranga sketched the first Etxeondo designs in 1976, next to the cows with whom they shared an ancient farmhouse in Villabona (Gipuzkoa). The surrealist painter Vicente Ameztoy had already designed the now famous logo for them: a belar-meta, a haystack, the traditional pile of grass stacked around a vertical pole. And shortly after, Paco bought himself a bike to pedal with the Hernani cyclists.

Those were the roots of Etxeondo, that still determine its character today: the farmhouse, the creative avant-garde, the bicycle.

María Jesús had a talent for drawing. In 1972, when she was only fourteen years old , she had started working at Subijana, a factory in Villabona that had been printing textiles since 1860.

“One of the owners of the company was Cristóbal Balenciaga, who brought orders from his colleagues in Paris haute couture: Christian Dior, Chanel, Paco Rabanne, Givenchy,” she says.
“We made fabrics, silk scarves for the fashionable elite, and everything was handcrafted. That was a school for me.” 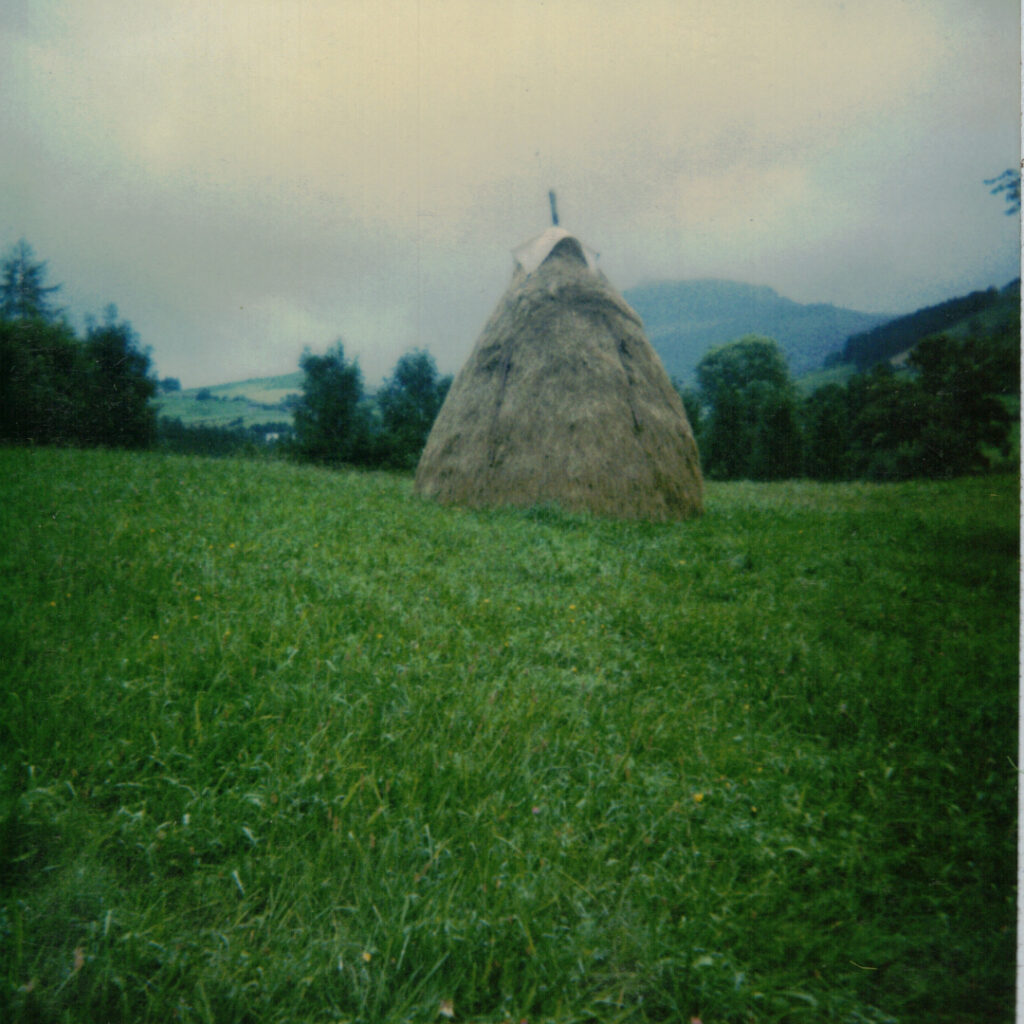 A 23-year-old Navarrese waiter arrived at the Subijana factory: it was Paco, the son of some butchers from Castejón, who had finished his military service and wanted to make a life for himself.

“I came to Villabona because an uncle of mine lived here,” he said.

“I started as an assistant to a butcher, but they immediately recommended me to Subijana’s manager, who asked to see me. ‘Let’s see, kid, how do you handle the numbers?’ “‘Well, well’. “So they put me with a colourist. We had to mix chemicals, calculating formulas, to get a certain colour. It was complex math work, but I got the hang of it and liked it. I became a colourist; in a world completely unknown to me.”

María Jesús and Paco met in the engraving department. There they worked with the new stamping machines, discussed their projects, made suggestions and corrections, and incidentally …incidentally found something special away from their work.

“We discussed work a lot and we had a good time, that was lucky,” says Paco.

“We were young, eager, and we realized that we were also creative.

“Sometimes we cheated a little: they asked us for one thing for a collection and we would present another.

“They didn’t know about the change. And it turned out much better.

“We realised that we knew how to do it well, that we liked the design, the colour.

“You looked at a fabric with a colour from a distance, you turned it, you appreciated if it blended well, if it made a line, if the litmus changed.

“You took into account the shape of the fabric so that the colour would be clean. Then we retouched; we refined a lot.”

Half a century later, colour is one of Etxeondo’s hallmarks, a trait that immediately identifies their garments.
Paco is still a passionate colourist: he is attentive to what he sees on television, in fashion magazines, any flash that catches his eye anywhere, and prepares with his daughter Amaia, who also specialised in colours, the shades that will set trends.

In 1976 Paco and María Jesús decided to tread their own path. Ameztoy, the painter who was one of the owners of the Subijana company, provided fundamental support: he gave them a space in his family’s home in Villabona, the Etxeondo farmhouse, to set up a workshop.

“Etxeondo was a real farmhouse, with an orchard, cows in the stable and not really equipped for a job like ours, so we started from scratch,” says Paco.

“I built an engraving machine, a chemistry kitchen for colourants, a light assembly. We didn’t even buy a machine, we did everything by hand.”

María Jesús continued with her job in the mornings in Subijana, to secure at least one salary, and in the afternoons she helped Paco in Etxeondo.

“It was all challenges,” says María Jesús. ”I was very young, but it was important for me to leave the factory and show that I could do this job on my own.

“We launched ourselves. We set up the company, we went to live together without getting married, something that was very frowned upon at that time.”

“Not hippys, but almost,” laughs Paco. “We have always been quite anarchic.

“We had all the imagination in the world; we wanted to create something of our own.

“We understood each other very well, we knew what we liked and what we wanted.”

“We corrected ourselves, we criticized each other, we argued a lot at work. It was exciting.”

“We were in love and that also had an influence” laughs María Jesús.

“We were one soul in two! How do you want me to explain it to you? There are things that you carry inside and cannot be explained.”

“In those discussions about work I spanked him a lot.”

What did Etxeondo do in its early years?

“What we could,” answers Paco. “To make clothes, prints and T-shirts, thousands of T-shirts.”

“It was not what we wanted,” says María Jesús. ”We did it to live and to start our project, because we had a vision.” 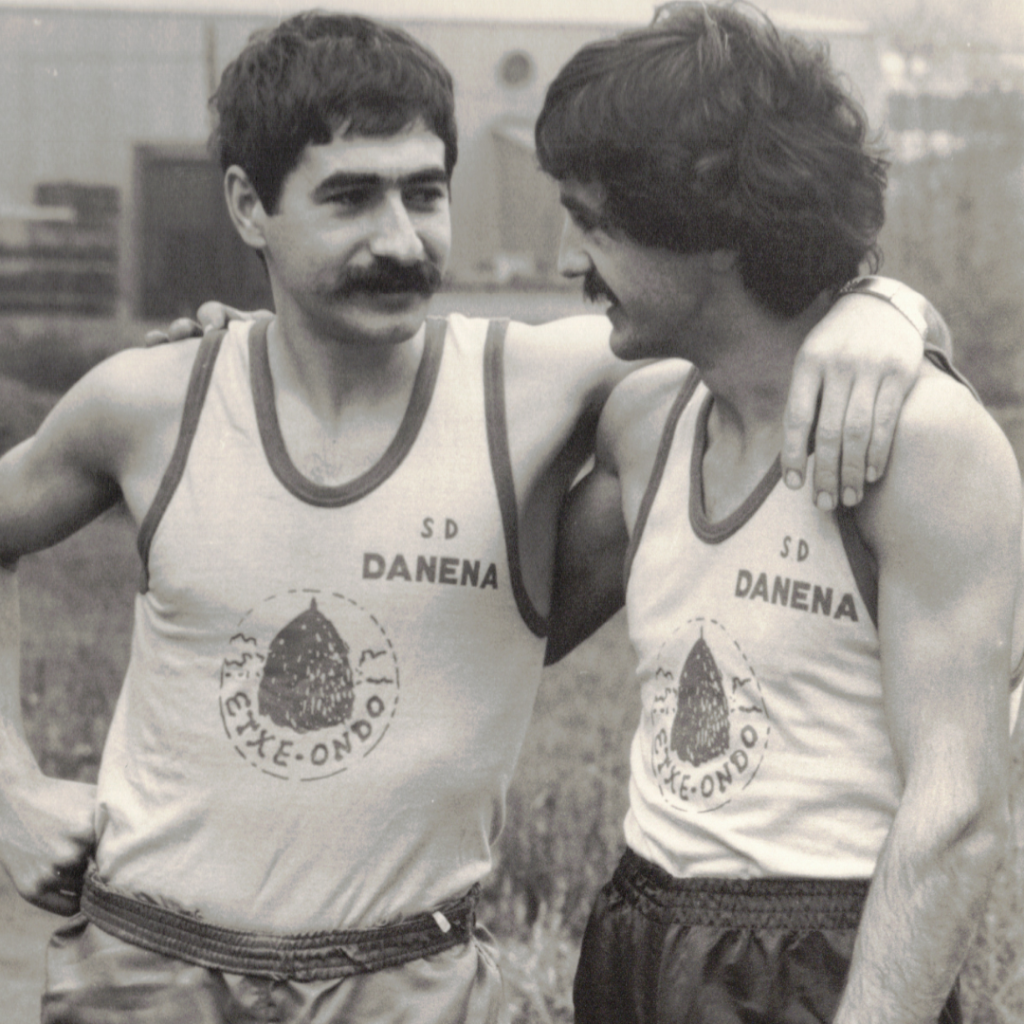 -And what was that vision?

“To make our mark,” she says. “We wanted to create a brand, develop our own style.”

“We needed a job to live, like everyone else,” says Paco. “But we also had a spiritual or creative need; call it what you want, a need to express ourselves.

“We were very lucky to work with artists. The artist is someone who makes you see what you did not see before.

“Ameztoy brought friends to the village, we printed T-shirts with engravings of his designs, with the logo of an art gallery, little things with very little circulation, ten or twenty pieces of clothing, but we learned a lot. We absorbed everything.”

They also collaborated with the Orquesta Mondragón, a group that fused music and transgressive, controversial, funny performances with the voice of Javier Gurruchaga and the performances of ‘Popotxo’, a mute clown.

“We made them the covers, the T-shirts,” says Paco. ”I had a blast with these people, but we have never been artists.

“We are technicians and entrepreneurs. Of course we are creative, but being an artist is something else.

“I have a lot of respect for the true artist,” Paco continues.

”I have met many, all very different, and I quickly realized they were special people, with a way of seeing things that unsettles you, that surprises you, that questions you.

“Some follow a very clear line, a development with great force, they express something of their own. We are technicians. Well, it is also true that I see some things that María Jesús has designed for art galleries and I say …this is …”

“… you will say that it is a botch, but for me it is art or something very close,” he says.

”What happens is that we do not seek to be artists, we are not going to do an exhibition, our quest has not been that.”

What was your ambition?

“To create something of our own that was recognisable,” he says. ”Our priority was not to make a lot of money or grow as a company, the priority was to get excellent products.”

“We are proud of a job well done,” explains María Jesús. ”Doing things well has always been our goal.

“If a garment comes with a poorly finished seam, with any detail that does not go, we do not accept it.